Holyrood will raise only 26% of its expenditure under Labour proposals

New research by independent, non-party think tank Reform Scotland, which set up the Devo Plus group campaigning for a more powerful, accountable and responsible Scottish Parliament within the UK, has questioned Labour’s claim that its proposal will see the Scottish Parliament raise 40% of what it spends.

Using the proposals contained in Labour’s Devolution Commission’s final report, and applying them to the latest GERS figures (2012/13), Reform Scotland is today revealing that under Labour’s proposals:

These figures take into account the additional spending powers stipulated in the report – £1.7bn in Housing Benefit and £500m in Attendance Allowance – and the additional taxing power in the form of an additional 5p of income tax, which the report estimates at £2bn.

Reform Scotland’s full workings are below: 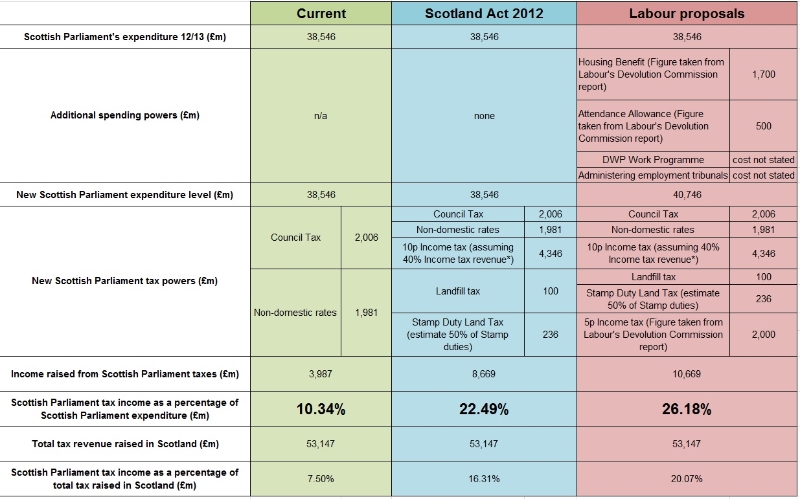 “Labour’s proposals increase the Scottish Parliament’s tax-raising powers by less than 5%, and represent only 26% of Scottish Government expenditure, which falls well short of the 40% they are claiming.

“The report is clearly motivated more by short-term referendum politics than a real desire for significant further devolution.”

*SPICe FSU Briefing February 2014 : “For 2011-12, the OBR estimates that SRIT (10p) liabilities would have been £4.31billion, equivalent to roughly 40 per cent of income tax revenues in Scotland.” http://www.scottish.parliament.uk/ResearchBriefingsAndFactsheets/S4/SB_14-14.pdf

This website uses cookies to improve your experience while you navigate through the website. Out of these cookies, the cookies that are categorized as necessary are stored on your browser as they are essential for the working of basic functionalities of the website. We also use third-party cookies that help us analyze and understand how you use this website. These cookies will be stored in your browser only with your consent. You also have the option to opt-out of these cookies. But opting out of some of these cookies may have an effect on your browsing experience.
Necessary Always Enabled
Necessary cookies are absolutely essential for the website to function properly. This category includes cookies that ensures basic functionalities and security features of the website.
Additional Cookies
Any cookies that may not be particularly necessary for the website to function and is used specifically to collect user personal data via analytics, ads, other embedded contents are termed as non-necessary cookies. It is mandatory to procure user consent prior to running these cookies on your website.
Save & Accept
Powered by